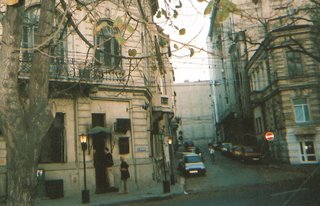 The Dracula Club and Other Vlad sites

1.  The Dracula Club in Bucharest is kitsch, plus good food and good fun - see http://www.travellady.com/Issues/Issue60/dracula.htm ("Dinner At The Count's")

Go to the front door, knock, and a little tiny door at eye level opens up and you will be examined. Closely. Then the little door will close.

Even if the premises are rented for a private party, ask if you can just slip in for a while.  We did that and had a fine time.

2.  For further Vlad sites in Bucharest, including the "Princely Court," Curtea Veche, being excavated, at http://romaniaroadwaysvladtepes.blogspot.com/2006/08/bucharest-princely-court-vlad.html

Posted by Carol Widing at 8:00 PM No comments:

The history of Romania suggests incessant strife among groups seeking survival or dominance: and larger-than-life leaders, voivvodes and princes, all set in a stark and often brutal (as were the ages) narrative relief.  An emergent strong impression is the ongoing courage and tragedy of the conquered, the fighting back, the briefly prevailing, only to be beset upon by another group. And always on the bottom: the Roma, old slave class of imported people, and poverty-ridden serfs, especially in Transylvania.  That site is pay-per-view JSTOR, so find it through the library.

Recalibrate from super-events to the more mundane realities. 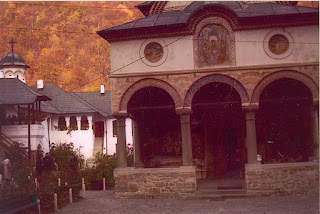 Horezu Monastery, Wallachia, Romania
1.  Value of a narrative.  For a grounding in Romania, both narratives and timelines share a flaw:  Variation in starting points, causations may be minimized.
2. Concepts in basic Romanian history

1,1  Empires:  Byzantine, Ottoman, Habsburg, Russian. Yet the language harks back to Roman times, and the Latinate. Large area, periodic hackings to bits. Romania is a different mix from the Balkans ethnically, and economically. When to stop wars; when to intervene.  Ethnocentric populism movements, see Shadow 75.

1.2  Geography:  Carpathian Mountains separate Central from Eastern Europe.  Wallachia is flat -- anyone can invade, Shadow at 81.

1.3  Role of Orthodoxy:  Religious currents.  Despite the Latinate roots, it is Orthodoxy that appears to dominate, not the Roman Catholic.
1.4  Ongoing impact of Communism in the 1950's and after:  an "indigestible" ethnic nation, see Shadow at 29. At 37 -- Communism uprooted traditions so the result is an unmatched kaleidescope. The need grows for impersonal laws, applicable to all, to avoid the intrigue and corruption that comes with weak institutions.

4.  Mega-events then and now

Cumans at 66 (the Basarabs, from whence came Vlad Tepes (see genetic haplogroup analyses of Y chromosome of persons with Basarab claims, at http://journals.plos.org/plosone/article?id=10.1371/journal.pone.0041803 that suggests perhaps they were not were Cuman, East Asian, after all). Yet, traditional "nations" groupings fall short, See Shadow at 53. Individuals are short-circuited when immersed in broad groupings. Explore ideas of Latin-Romanian culture, juxtaposed with Orthodox.  Regaining self-respect after immersion especially in Communism-Stalinism is a struggle, Shadow at 56. Crowds, leaving behind individuality: to what end.

Romanians remained or sank back into status of a frontier people, under threat, constantly on the defense.  Overview at Shadow 64ff, and explore varied histories of those now trying to live together including combinations of early settling Mongols, and now Sunni Muslim  Crimean Tatars.

Romania is dependent on Russian natural gas for 1/4 of its needs, Shadow at 48. Russian efforts to extend and incorporate Balkans into its pipeline networks are ongoing, keeping Ukraine and Moldova in upset cross-hairs.

Booklist in the nature of a library resource online: To recapture a sense of adventure, sweep, recollections of the author who loves his old paperbacks:

Posted by Carol Widing at 11:02 AM No comments: