Campulung lies between Vatra Dornei and Suceava.  Some areas have a history that is unexpected.  The terrain here shows ravages of clear-cutting as the logging technique.  Leaving Putna and heading west, there are vast areas of over-logged mountains.  Is anyone reforesting?
. 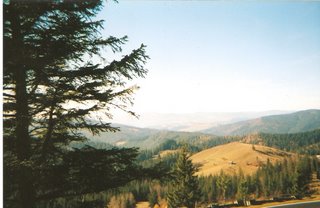 
Campulung also was a major population area for Jewish Romanians, see http://www.jewishgen.org/yizkor/bukowinabook/buk2_088.html/  The group may have begun with traders, commercial travelers coming from Hungary, through Siebenburgen, and documentation of them, including restrictions on their activities, is as early as the 1500's.  Was it the rest stations that they initiated that blossomed into the cabana system today?

Vatra Dornei:  This town stems from Roman times, see http://www.jewishgen.org/yizkor/bukowinabook/buk2_084a.html/ but features more tragically as the site of decimation of Jews of Bukovina in World War II.
Posted by Carol Widing at 11:47 AM No comments: Links to this post