1.  This is a roadside dumping area, with Roma (gypsy ethnic group) looking for clothing, anything that can be repaired and resold, or used.

The gypsy or Roma population was decimated in World War II. Read about gypsies at For a basic history of gypsies, see http://www.gypsy-traveller.org/history/index. Do a search for gypsies.

2.  Roma are countrywide, and have had a difficult history, including centuries (past) of enslavement in Romania and discrimination now. See "Minorities at Risk" at http://www.cidcm.umd.edu/inscr/mar/data/rumroma. Go to the e-museum that the University of Minnisota offers at http://www.mnsu.edu/emuseum/cultural/oldworld/europe. Then click on Roma. Go to the main home page first, and see all they offer in other areas.

Romania, however, was an Axis partner to Germany, and did not "systematically annihilate" Roma in Romania.

However, about 26,000 Roma were deported in 1941-1942 by the Romanian military and police, to Transnistria, in SW Ukraine under Romanian administration. Thousands died: disease, starvation, and brutal treatment. See http://www.ushmm.org/wlc/en/article.php?ModuleId=10005219

The holocaust in Romania was officially remembered in Romania in 2006. See http://www.iht.com/articles/ap/2006/10/09/europe/EU_GEN_Romania_Holocaust_Victims.php. Read its history at hist.academic.claremontmckenna.edu/jpetropoulos/ironguard/holocaust.htm.

4.  Statistics difficult.  In the town of Moisei, see post here on Maramures, there is a special memorial to Jews captured and killed, but no break-down of which of those killed in the specific event sequence there were Jewish.

5.  Value of diaries.  Keeping diaries of those times requires literacy and then preservation, discovery and translation - for me, into English. "The Diary of Petr Ginz 1941-1942," edited by his sister, Chava Pressburger, was discovered in 1993 but only translated into English in 2007. See The Places of Petr Ginz. See also Petr Ginz: The Places, The Legacy. Are there diaries in Romanian?


Children beg, but a strong body language "no" - including flat palms crossing and flung out, usually brought the adult from a doorway nearby to signal a cease.
Posted by Carol Widing at 12:46 PM No comments:

Cluj Napoca has strong Hungarian roots, with migrations back and forth over centuries, see http://www.clujonline.com/  The Hungarian national dress, worn for special occasions, looks different from the traditional Romanian that we saw in northern Maramures, but we are not sure if that is so.  This was on the way to Cluj Napoca, in a small town. 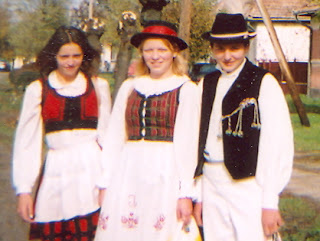 
To navigate in any city:

Look for the country's equivalent of the "city center" sign - centrum, or its equivalent.

The city center signs will begin dependably at the outskirts, at the motorways, and lead you.

Go to the main square, then look for some place to sleep.

Park once, where you are staying the night; then walk. No driving at night if possible - vehicles may not have lights, horse carts may not have reflectors.

Everyone is more careful in driving there than we are here, looking out for horsecarts, people. I saw no accidents except an occasional urban truck-car or car-car fender-benders.
Posted by Carol Widing at 4:37 PM No comments:

Cluj Napoca and Art. The Cluj School. Gallery Plan B.

Cluj Napoca.  Town in Transylvania.  And Art.
The Cluj School. A 2013 update.


Post dates reflect the chronology of the earlier trip, not the dates of events referenced.

Those artists and others became known as the Cluj School, thanks to Giancarlo Politi in 2007. He was known largely for not only art criticism, but for founding Flash Art in Italy.  Cluj's gallery, founded by Mr. Ghenie and Mihai Pop in 2005: Plan B.  Video, Adrian Ghenie on Gallery Plan B, is at  http://www.youtube.com/watch?v=0dSFurfjewY

The name Mircea, as in the ruler, is in itself, an old, venerable name. Think Mircea the Old 1355-1418, or Mircea the Elder: father of Vlad II Dracul, thus grandfather to Vlad III Dracul, known to some as the Impaler.

2.  Cluj, or Cluj Napoca, is small, some 325,000 residents with permanent addresses there; and it far older than mere medieval.  Greek geographer Ptolemy 85-165 ACE) identified it. Cluj became a Roman municipality under Emperor Hadrian, and a colony under, was it Marcus Aurelius? See http://www.visitclujnapoca.ro/en/despre-cluj/istoria-cluj-ului/

It was only in 1173, however, that Cluj Napoca was documented as a settlement, "Clus" as the word at that time, for "hills surrounding." Other names attached, depending on the Hungarian or German (Saxon) origins of then-dominant groups. Other protections and benefits stemmed from its diversity and the talent of its people; with a constant undercurrent: disaster for one group resulting in boon for another. For example, the indigeous population was decimated by Tatars, the area then settled by Saxons. See site.

Posted by Carol Widing at 10:56 AM No comments: