Romania is not a first thought when the old Silk Routes are mentioned.  Still, it was an important stopping point, a gateway into Europe.  Bucharest boasts a fine caravanserai, now offering a restaurant both in the inner courtyard, and in shelter when needed.  The architecture of these structures has remained constant over country boundaries, see AramcoWorld magazine, at http://www.saudiaramcoworld.com/issue/201104/.  The large square design, two stories on the outer walls, large usually single gate entry, tall and wide to accommodate loaded camels, a well, areas for a mosque, rooms all around, and accommodations for royal travelers as well as those on pilgrimage.
.
These took money and organization to sustain:  unending need for fresh straw, filled ewers of liquids, even wines for the European trader heading east?  There would be a scribe at the entry, recording your identity, your goods, your route, how many livestock.

The idea dates, probably, from the 5th Century BC, although there are references in Middle Eastern tales, such as Gilgamesh, to a traveler finding accommodation, an inn, 3000 BCE.  Inns, rather ramshackle, called "pandochions" accepted all comers as well, and the Good Samaritan of Bible Story, left the wounded traveler at one of those.  Then came a more refined Arabic "funduq".

In Romania today, there are the spaced hostels, pensions, the "cazare" everywhere (see http://www.romaniacazare.com/); and hotelier complexes that recall the huge enterprises of the old days.

We save the capital city for the end of the trip. We aim right out of the airport into the great beyond, wherever that is.  Then, we are not rushed on our way back; or, if we are, it is easier to come back to a major city if we can. City traffic upon first landing is not a good introduction to any country.  Get out of it.

For the air force, those who served are buried with a propeller instead of a headstone. 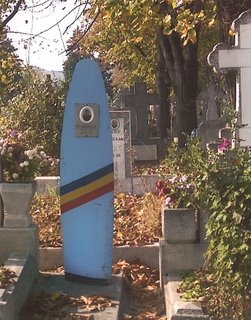 The custom of propellers marking graves of pilots is found elsewhere in Romania. For locating well-known graves, go online.  Visit Find A Grave, at http://www.findagrave.com/php/famous.php?page=country&FScountryid=6

2.  Others who died in the political realm are not so revered, at least in public.  See Lenin statue, toppled, Mogosoaia Palace, near Bucharest.  Lenin's statue is discarded behind the kitchens at Mogosoaia Palace outside Bucharest.

At the Communist Exhibition at the Museum of the Romanian Peasant in Bucharest, however, there is a lower level, creep down in search of the Ladies, and find reverential exhibits, complete with altars, for Lenin and the Ceaucescu, and others.

3.  Nicolai Ceaucescu is buried here, but at the civil side of the cemetery. 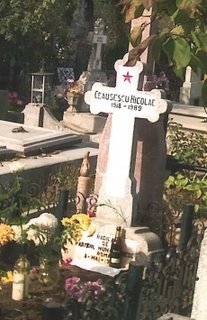 The Ceaucescus are buried separately at the Ghencea Civil Cemetery in Bucharest, but are some aisles apart.

We looked for a long time before finding either grave, and were carefully watched by guards.

I believe the concern was simple vandalism, and we were not hindered in any way as we looked. Nonetheless, we were watched, watched. Guns ready.
We are not used to that. All we wanted was a look, and a picture. Got them. Got out.

There are tributes on the graves. Candles, objects, even a beer bottle.

Posted by Carol Widing at 7:58 PM No comments: