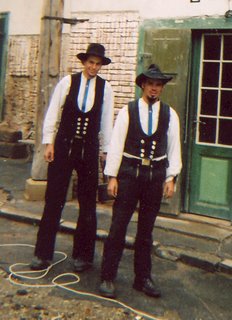 Sibiu, Romania. We had believed these men to be Roma, but now learn that the dress is that of traveling tradesmen, or "naver".  There are many Roma, of rank and ethnicity from the poorest, to well-to-do.  There is a casino in Sibiu that drew many with means, and in elegant dress.

1.  The Naver are of Saxon heritage.  This group is common mainly in the north central parts of Romania. They have a long tradition of education and skill. Traveling tradesmen, with knowledge seen by outsiders as secret, and with connections to Teutonic Knights.

This relationship, to Germany, relates back to at least.. The Old Holy Roman Empire where the boundary between Slavic and Germanic lands held for centuries, but with flexibility, blending and fighting.

In Romania, German peoples were invited in during the medieval era, to help with mining and agriculture in Slavic lands, and then stayed, see http://www.galiziengermandescendants.org/Data/History2.pdf.  A Germanic tradition here in Sibiu is just a part of the larger Germanic culture in Romania. There are the German - Saxon walled churches located in the region.

2.  Relationship of Naver to Teutonic Knights. Occupation, skillsets. The Teutonic Knights were a medieval monastic military order that fought in the crusades, see http://www.britannica.com/EBchecked/topic/586765/Templar

A search for Naver - a quick one - shows more information about the tradesmen and Templar influence.
The Templars were not only fighters and guardians of travelers and pilgrims, and highly successful bankers holding scrip and property until the bearer might or might not return to claim his property; but also keepers, the tales tell, of mysteries taken from the Holy Land. Now we learn that the Templars were also part of an information/skills network between the East and to the West; that the Templars brought building skills and implements to the West, giving rise to the Masonic tradition and its symbols. And the Naver arose from that tradition. And that those connections enabled the building of the ever-more elaborate Gothic cathedrals. More info see http://www.curezone.com/blogs/m.asp?f=665&i=2/. 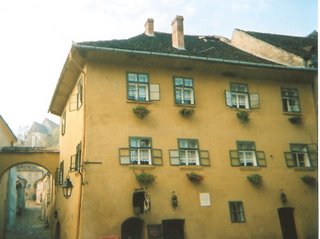 Sighisoara, birthplace of Vlad Tepes, Romania
Sighisoara was established by the Saxons of Transylvania.

The home where Vlad Tepes was born in 1431 is now a restaurant. Expect and get generous portions of good basic food. Sauces and frills are few, so the atmosphere seems authentically Romanian.

The town is in excellent medieval condition, never bombed, or overrun. See the photo gallery at http://www.world66.com/europe/romania/sighisoara/lib/gallery.Although he ruled Wallachia for periods in a brief timespan, 1456-1462, his reputation suggests a far longer domination.

2.  Monuments and The Novel, Dracula.

There are references to Vlad Dracula in many places, and they often refer to the novel, Dracula, by Bram Stoker, even though it is far removed from the life.  Reread the Stoker novel at Dracula, http://www.literature.org/authors/stoker-bram/dracula/

As in other Romanian cities with ties to Vlad Tepes, there are excellent descriptive plaques in Sishisoara. They separate out the kitsch, and offer historical information particularly where Bram Stoker made other fictional claims. The result is to interest people who want to know what really is known, or reasonably so; as well as those who want to follow in Bram Stoker's characters' steps without critique.

Entire tours are devoted to Vlad, but the distances between real sites is great, and there is too much to see in between to focus only on Vlad.. The Romanian Tourist Bureau provides an overview of his life as told in legend. See http://www.draculascastle.com/html/poenari.

Sighisoara is a World Heritage site. See http://www.romanianvoice.com/images/orase/sighisoara.php. The full list of places on the Romanian World Heritage honor roll is at http://www.thesalmons.org/lynn/wh-romania. Fine photos: at this Unesco site --  http://whc.unesco.org/en/list/902

Posted by Carol Widing at 3:42 PM No comments: Links to this post