2012 Update for a lovely area.
Tradition protected; while seeking more than sustenance.

This area of Saxon villages in central Romania is increasingly a destination point.  The Mihai Eminescu Trust, as well as the Charitable Foundation set up by the Prince of Wales, have been revitalized, supported.  The settlements began in the 11th Century, and the way of life is difficult there, and has been since about 1240. It is at the crossroads of invaders from several directions:  Mongol from the East, Ottoman from the South, and Hungarian from right next door; add other Romanians, and the Plague.

When we were there, the agricultural methods in use look nostalgic, but were backbreaking. 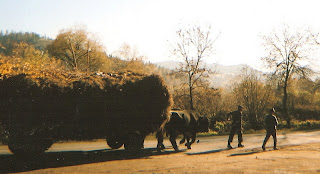 The bucolic, with slow oxcarts laden with hay, cows following a leader (human or bovine) down the village street, peeling off to houses in the lane, are deceptive.  This is subsistence living. Mechanized ways were not prevalent in this section of eastern Romania. The west is more mechanized, with tractors. Romanian history:  An Australian tour site gives a comprehensive look -- see http://www.asatours.com.au/21313/1536-21313-romania-revealed-overview -- Asatours, Australia, on Romania.
.
Saxon areas:  After WWII, Saxon adults (as German heritage) were largely sentenced to hard labor and deported to the Soviet Union.  Only about half survived to return.  The country by then was communist. See Financial Times June 16-17, 2012 at p.2. In 1990, they were invited to return, upon Nicolai Ceausescu's removal as President.

Posted by Carol Widing at 11:22 AM No comments: 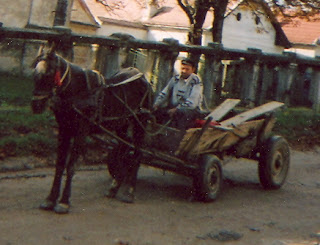 
Horsecarts, wagons with auto wheels, are built with divided supports for flexibility front to back, and can carry whole families on board, goods, equipment. They are also on all the roads, including major highways, until we now read that they are banned from major roadways.

We never saw any accidents, even on the motorways.  The carts kept well to the side. There were only courteous drivers slowing up, going around, blinking lights if a cart happened to be in front, and that was the reason for the slow-up. So many of them - on main highways, everywhere. A rule for us was never drive after dark if we could help it - many carts had no reflectors, and no lights. In foggy areas, we crept.

There was a massive road-building program in progress, however. We were there in the fall, also, and that meant end-of-summer pothole filling in preparation for another winter. The best time to travel in Romania then was in the fall. Spring meant the new holes gaping out there, and worst for the horses. So, European Union aspirations mean big bucks for some, and a hindrance to an already marginal life for so many poor.

See the issue of those who prosper from their investments and properties, at the expense, again, of the peasant (andthe gypsy) who cannot get to their destinations in many cases, except by the major roads.  See  http://query.nytimes.com/gst/fullpage.html?res=9D06E1DA1630F931A35752C1A961958260&sec=&spon=&pagewanted=all

Horsecarts are now banned from major roadways. The funding is for the roads for the rich, and to draw in tourists;  not for the poor areas at this point: http://www.gadling.com/2007/11/20/the-death-of-an-anachronism-horse-carts-banned-from-romanian-ro/
Posted by Carol Widing at 6:24 PM No comments: 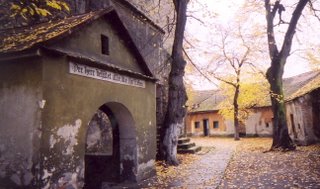 
These walled Saxon churches are World Heritage sites. See http://www.cimec.ro/Monumente/Lpm/UNESCO/Biertan/eng. The old German script is still over the door. There were substantial migrations of Germanic people into Romania beginning in 1123, by invitation of the Hungarian King Geza, and during the centuries.
.
The new groups kept their own language, and protected themselves with walls like these around towns and churches in the 15th-16th centuries. See http://www.archaeology-romania.org/projects/fortified-saxon-churches. We were told that funds are coming in again, from Germany, and from the descendants of those expelled by wars and other invasions. People also moving back.

There is a map for them at http://www.cimec.ro/Monumente/unesco/UNESCOen/indexTrans.
.
These church walls, seen from the inside, have rooms in them for entire families. We were told that if a couple wanted a divorce, they would be put together in one of these rooms for 60 days, be fed and taken care of, and as a result, they seem to work it all out and no divorces were recorded there. Most of these churches are between Sibiu and Sighisoara. Here is a fine photo of a walled church: http://www.roconsulboston.com/Pages/InfoPages/Travel/DealulFrumos.
.
More specific ethnic-cultural roots:

Other sites say these were Swabians, from the Danube area in Germany - see the Schwabisch Hall post at Germany Road Ways; and that would place them from the Augsburg area, see http://www.mpip-mainz.mpg.de/~pleiner/schwabhist.html.  Saxons were from farther north, but it appears that the Hungarians specifically felt an affinity for the Swabians, but the Saxons also came.  Their own old mythologies refer to the migrations, see http://www.urbanmyths.ca/Myths/The-Saxon-And-Swabian-Migration-.html 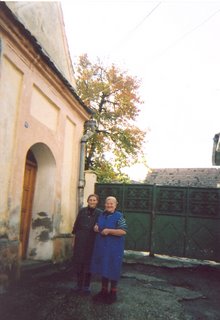 Village women, near a Catholic Church, near Targu Mures, Romania
.
Label this episode: To the outhouse.
.
This picture is not of an outhouse, but we had been going back into villages off the road to try to find our own walled churches.  The DK book is not detailed enough. We came to one lovely church - and it turned out to be a Catholic one, not German - and these ladies kept gesturing to the outside and indicating, come on.
.
So we did, through mud, over yards, around puddles, through gates and gardens, all winding through the village until we came somewhere and they gestured us over with great ceremony.

The ultimate destination was indeed an outhouse. Very hospitable. Where else would fine local folk invite tourists to their outhouse? We didn't need it, but appreciated the thought and saw parts of a Romanian village no bus tour could match. Thank you.
.
There are many Roma, or gypsies, in Romania.  They were brought in as slaves and as a group have not been allowed to advance.  The cultures do not mix. See Gypsies, Roma, Romani.   This is not yet a fully automobile society, and rural areas are served by horse carts.  My understanding is that most of those belong to the Roma, not the other ethnic peasants.  We didn't see a motorized tractor for 10 days.
.
Horses and carts are also in the cities and the highways. The construction of the carts is ingenious, with a break in the axel (what is that connector not between wheels laterally, but going the length of the wagon to accommodate the huge potholes and ruts? Car tires are used.

This horse cart was outside the walls of a rural village, but not the Saxon walled church village. 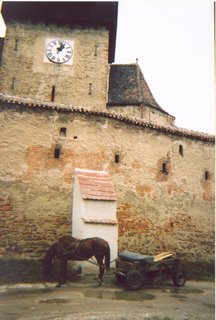