Who invented Baseball? The Romanians.  Can it be so? Yes! Great!

The inventor of baseball was not Abner Doubleday, despite the Cooperstown, NY Baseball Hall of Fame, see http://www.whoinventedbaseball.com/. 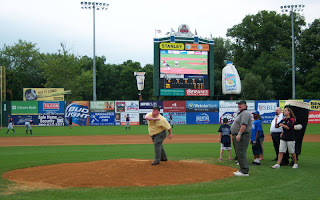 Play Ball!
.
The modern field came about in 1845, thanks to Alexander Joy Cartwright, see ://inventors.about.com/library/inventors/blbaseball.htm/. But, despite continuing claims that the game was invented in America also in 1845, the British had been playing "Rounders" since the 1600's, and then the American colonists played their version, called "Town Ball", see ://www.schools.pinellas.k12.fl.us/educators/tec/Mutert2/begbb.html/

Play Oina! It is the Romanians who invented the game closest to baseball - or its group equivalents before the name came about.  They have been playing "Oina" since 1364, during the reign of Vlaicu Voda, and Oina is the "godfather" of our baseball, see ://wiki.answers.com/Q/Who_invented_baseball/  It remains the national sport.  There are back-and-forth lanes (not our diamond), and the game lasts 30 minutes, and read there of the many similarities.

This Inventorship:  other sources agree.  The idea is supported by this article in the Seattle Times - see ://community.seattletimes.nwsource.com/archive/?date=19900422&slug=1067700/   Transylvanians introduced it here, according to  Romanian sports writer Cristian Costescu.  They emigrated from Alba Iulia. They joined the US Army, taught the game to their fellows, and one of those was - you guessed it - Abner Doubleday, who added a twist or two.  See also the Romanian baseball origins at ://www.buzzle.com/articles/origin-and-history-of-baseball.html

Oina:  11 on a side. One team bats, the other team takes the field.  The pitcher, however, is from the batting team and lobs over an easy slow one.  Whack!  Batter runs 120 yards.  There are 9 bases.  If the batter gets tagged, that earns the fielding team points, so you can rack up your score by tagging the runners - not just by hitting and getting home.  Bat looks like a cricket bat, and nobody wears gloves.   Each side gets an "at-bat" - and all 11 get a chance. 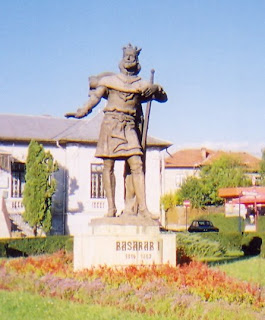 Basarab I (not Vlaicu Voda)
Vlaicu Voda - see the monastery he founded, at ://alexisphoenix.org/vodita.php/.  Do an Images search in Bing, and see a statue that we had thought, when we were there, to be Basarab I, and that is the name on the pedestal.  Here is our Basarab, the same statue that shows up at Bing's Images Vlaicu Voda.

Basarab does sound more like baseball.  That clinches it.

Posted by Dint at 1:52 PM No comments: Links to this post