What human qualities, if found in a creature not human, shall afford that creature the rights and protections of a human. Remus Cernea, legislator in Romania, the Black Sea area, city of Constanta, has appropriate ideas. He would afford to dolphins the same rights as people. Personhood, so that killing a dolphin, for example, would be subject to a murder analysis.  Would it be reciprocal? For another day.  For now, whether this effort succeeds is not the issue.  The issue is the effect of raising how we exploit creatures to the level of legislative discussion that is more pivotal to the cause of how we coexist with our fellow planet earth residents over time. See http://uk.reuters.com/article/2014/02/14/oukoe-uk-romania-dolphins-idUKBREA1D1J920140214/.  For Mr. Cernea's Statement, Remus Cernea, and text of proposed legislation at the Draft Law, http://voxpublica.realitatea.net/politica-societate/draft-law-for-recognizing-dolphins-as-non-human-persons-102731.html

This is news in any nation that eats, uses, keeps animals. Dogs have long been excluded from humanitarian considerations in Romania, for example, even when pets. I recall in Romania the hundreds of stray dogs, all breeds, wandering alone or in packs even in unpopulated areas. Dogs forced loose by laws that forbade residents forced out of their homes for governmental purposes from taking their pets with them.  We reminded ourselves, tempted to pet, to talk softly, to coo, hello puppy, to keep hands in pockets, eyes ahead. Our impression was that Romania did not care, or was not allowed to care, about its animals. See http://www.occupyforanimals.org/romania---on-the-greatest-animal-genocide-in-european-history-government-initiated-anarchy-violations-of-human-rights-and-children-rights.html

1. So what is changing? Thinking. Thinking as to dolphins, if not dogs. Any nation can boast a politician, a lawmaker, with ground-breaking causes, but this cause should be spread.

Romanians are accustomed to Michael the Brave, who in the the tumultuous 16th C ff, managed to unite disparate interests with Polish, Hungarian, Transylvanian groups at each other. No quarter given to those subject to slaughter. He then lost, with betrayals, brutality ensued, Michael returned, prevailed but was assassinated, see Zsigmond Bathori, ,Michael the Brave, and Giorgio Basta article at http://mek.oszk.hu/03400/03407/html/118.html. Scroll down to 1-753.   It is time for Remus the Brave.  Is that so? Or too melodramatic? 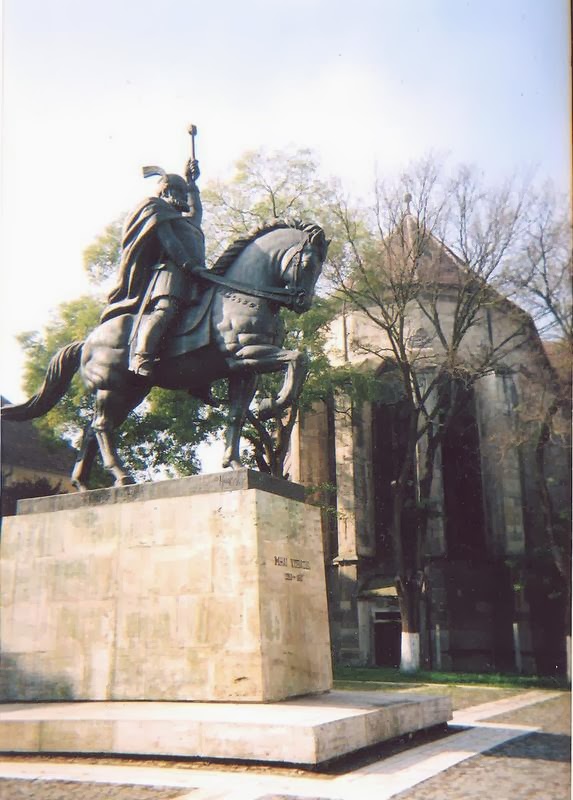 For Remus Cernea, imagine the interests that will rally against his vision. May he, as we say, stay strong and perhaps America can follow.

2. Then ask:  On what ground do humans exploit, dominate, use fellow creatures. Because we can?  Because our religion (whose?) translates taking dominion to domination and not leading gently as a god?  See meaning of dominion, from old texts, at Vetting Roots, http://martinlutherstove.blogspot.com/2009/04/what-do-you-do-i-create-tumors.html?q=dominion.  Lead gently, as a god.

3.  Here, Cernea cites the dolphins' high intelligence, relationships within the pod, with other creatures, personality, but all that is only a start.  With equality of right to a life, even if environmentally different, and without ten digits up and down, killing would be subject to the same analyses as murder. The Black Sea rejoices.

Japan is recently in the news for its corralling of dolphins into a killing bay, slaughter of those who cannot escape.  Is it really just a matter of culture, and such deaths not to be reviewed by anyone not of that culture.

4.  How does the draft law look?  This cannot be subject to copyright, so here it is:  Let the Romanian legislature address all issues with clarity and vision. And go to the site and order a T-shirt. http://voxpublica.realitatea.net/politica-societate/draft-law-for-recognizing-dolphins-as-non-human-persons-102731.html


Art.1 All species of dolphins enjoy special protection on the territory of Romania, each individual of this species being considered to be a non-human person.

Art. 2 The hereby law defines a non-human person any being that does not belong to the human species, yet posses a developed intelligence, the capacity to form complex social relations, and is the bearer of the following rights:

2. Right to bodily integrity, and to be free from any acts of cruelty

3. Right to free movement in their own natural environment, not to be captured or hold in captivity with other purposes other than to be offered medical assistance or to be protected from an impending danger.

4. Right to be protected in the own living natural environment, and not to be separated from the group or family he or she belongs.

Art. 4 (1) Any current activity involving holding dolphins in captivity and/or using them in various entertaining facilities will cease in no longer than 12 months from the adoption of the hereby law.

(2) During this 12 month period, all dolphins that are considered fit for reintroduction by the specialists will be released into their natural environment populated by the same species.

(3) The dolphins that do not meet criteria for reintroduction in their natural environment will be placed in specialized care for the rest of their lives, and will no longer be used for entertainment purposes on any other purposes that will contravene the status of non-human persons.

Posted by Carol Widing at 4:41 PM No comments: