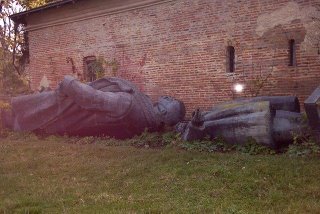 Mogosoia Palace is not far from Bucharest. Enjoy the grounds before heading into the traffic. It dates from the 1600's at its earliest parts. See http://www.bookcase.com/~claudia/mt/archives/000066.html

For us, the lure was the statue of Lenin, pulled off its pedestal in Bucharest and ignominiously dumped behind the kitchens here.


The complex shows Byzantine elements, and the style known as "Brancovenesc" after the Voivode, local ruler of Wallachia who built it, or as he is known more simply, Brancovan.  There are combined balconies, arcades, staircases all over, balconies Greek columns, and Renaissance and Baroque - all in one setting. See http://bucharest.8k.com/mogosoaia/  Brancovan offended the Ottoman overlord, however, and lost his head. As with Vlad Tepes, it was not uncommon to keep the head and return it without the body, as Brancovan's wife did,

The Palace became a high-level caravanserai, or "han", with space for passing caravans to enter a protected area for the night of a few days,  See the history of hans at http://www.turkeytravelplanner.com/architecture/SeljukCaravanserais.html

Mogosoia was renovated in the 1800's by an aristocratic family, then followed a series of patrons, owners, literary and cultural uses. It became a salon, and now is in a holding pattern, the lake silting over, the views muted.

Posted by Carol Widing at 11:20 AM No comments: