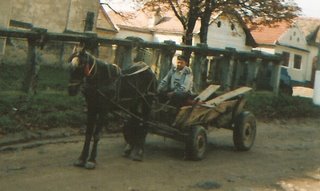 Expect to share it with horse carts, ox carts. The transportation for rural people in the east is animal, and animals also do the plow/farm work.

I understand that a law now prevents the horse carts from the major roads.  How do rural poor people now get around?


Horse carts are everywhere but the high mountain passes.  Towns, cities, countryside. also in the towns and cities. Does the prohibition further marginalize the poor, without providing an alternative.

In the industrialized west, there were tractors pulling the wagons of produce and hay - it was 10 days, however, in  Romania before we moved out of the agricultural east and center, and saw a tractor.


Oxen are usually not on the major roads. We were there at harvest time, October, so the loads on wagons were huge. 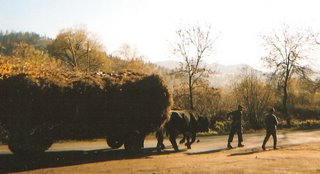 See Romanian driving rules at http://www.enzia.com/Pages/Car5.  The car of choice is the practical Dacia. See it new at http://www.daciaclub.eu/romanian_carmaker_manufacturer_dacia.php, and old everywhere else. They go with duct tape and fit a dozen people at once. The Dacians occupied Romanian land in the time of the ancient Greeks and Romans, see http://www.eliznik.org.uk/RomaniaHistory/dacia.htm.

The Roman Emperor Trajan finally conquered this powerful kingdom in about 105 AD -- that late, and after fierce warfare.  See Dacian culture at YouTube, http://www.youtube.com/watch?v=S61vFE8swUk

Check the US government info on any country where you plan to drive. For example, go to travel.state.gov/travel/cis_pa_tw/cis/cis_1004. The Romanian tourism people are also helpful. See www.romaniatourism.com/while.

Afterpost- 1/2/07 - with Romania now in the European Union, what will change? Not sure.

I saw no accidents. People are courteous, but go very fast. Just watch for everyone else on the road, on foot or with animals, and pass fast in and out yourself. Other drivers will slide over and make room, I found. There are people carrying firewood and other necessaries on their backs on the roads. We just went slow and did fine, even on back roads.

Avoid night driving. If dark comes upon you, creep. All bets are off. The horsecarts and some of the older cars do not have lights or reflectors. Fog settled in one day (very fitting - at the Hotel Castel Dracula, Transylvania, east of Bistrita at Piatra Fantanele). We stayed at the hotel, reading and chatting until noon, as did most everyone else.

It is easy to drive in Romania.  Their alphabet is Roman, as ours, so names are easy to read, easy to find.  Roads may end unexpectedly, so build in extra time for the turn around and finding another way. 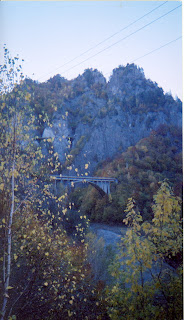 
Passing. In passing, the customs are different.
The passer tailgates. The slower vehicle immediately pulls over halfway on the burm or as far as possible. The passer whizzes out over half the center line, looks, then keeps whizzing past or pulls back in. The slower one meanwhile leaves plenty of room. The passer seldom has to go entirely into the oncoming traffic lane -- I did not see one accident caused by passing. I only saw one fenderbender in a town, a usual rearender.

Roundabouts. Most sites on driving in Romania are alarmist. Not so. Just keep going around the roundabout until you can slither off, and watch who is ahead and beside you first, then look behind.

Dogs. Watch out for the stray dogs. They are quick, but all over. Some estimates are 2,000,000. Just go slow, and keep your hands in your pockets. The situation is tragic. Dog hell, says this site : Dog hell. Horrible to read about, but if you are going there, you will see them. During a Ceaucescu relocation period when entire neighborhoods parts of great cities were being torn down and enormous public buildings put up, the government did not permit people to take their pets. So they were set loose, many survived and are all over as feral cockers and feral pekingese and everything else huge and little. No neutering program until too late. Now the government is just trying to get rid of them. Many beautiful dogs there, many sick. Many. I did not see dogs run over, though. Drivers are careful. But the news accounts say worse, things a passer-by does not see.
Posted by Carol Widing at 9:51 AM No comments: