Arefu: Reward from Vlad for the Ages

Arefu:  This village enabled the escape of Vlad III Tepes from the invading Ottomans in 1462.  Vlad's wife, fearing the worst if she were captured, had already thrown herself from the parapets of the fortress Poinari Citadel, now a ruin.

Drive through the village and find deeply rutted dirt roads, a poor place, but proud. Villagers even today trace their background to Vlad's time, and those loyal to Vlad Tepes. See http://www.romaniatourism.com/dracula-legend.html/  Did Vlad bequeath to them their lands in posterity, in thanks?  I am looking for that reference. 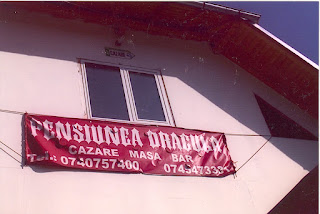 Dracula Rooming House, a Pensione, Arefu, Romania
We did not stay here because we were headed further through the mountains. Luckily we found a cabana, a government hotel, before it became dark. Better, looking back, if we had simply stopped. Pensiones were fine, clean, safe. But Dan would say, let's go on a bit. And we would.  Vlad Tepes: a complex leader, a violent era, as ours, in our way, spend time looking for history. See http://www.theculturedtraveler.com/Archives/Aug2005/Dracula.htm
Posted by Dint at 6:24 PM