Music -- gypsy fast-fast at the hotel 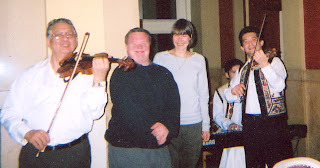 At this hotel, we joined with another traveler who was on her own. Good times. The Rom, Roma, Romani, or as too-casually known, Gypsies, have a long history, see http://www.eliznik.org.uk/RomaniaHistory/minority-gypsies.htm

Traditional trades, now diminished with the stopping of the caravans, and warehousing of populations in high-rises, include:  musicians and dancers, tinners and coppersmiths, jewelers, blacksmiths, panners of gold, sieve-makers, horse-dealers.  See the Eliznik site.

Local pubs also provide local music, as well as the sophisticated jazz.  Enjoy the local pub and its music. Even watch a video of a wedding that day. See Romanian music.


I believe Bercuvlahu is the video producer, not the musician. Is that so?
Dance music: This sound was on the car radio - there had not been a supplanting by Western music yet. Good.  http://www.youtube.com/watch?v=CDDNC7LZz-c&feature=related. 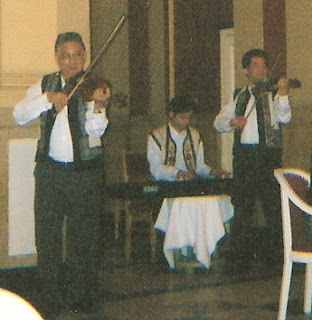