Romanian Heroes - identify as you go 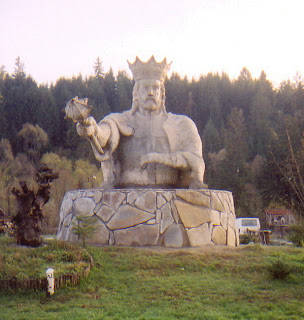 Identifying royalty, crown by sceptre by turban.
Which is this?

With the history of this area so new to the West, we recommend two steps: 1) Take a little history book - we had "Romania, An Illustrated History" by Nicolae Klepper, Hippocrene Books NY 2002. and 2) Start a list of names and dates and distinguishing features as you see the statues. Note the crown or headdress styles. I am not confident in the "images" internet search method - too many other people confused. No controls.

We saw recurrent people, identifiable by their headdresses or features. Much revered. A basic chronology: 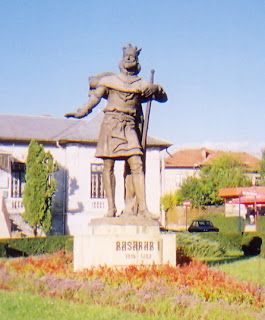 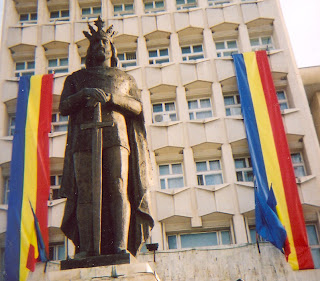 Father of Vlad III Dracula. Dracul meant Dragon. He was bestowed with the Order of the Dragon, a crusading order (award in Nuremberg), so was known as Vlad Dracul or Vlad the Dragon. Later assassinated by John Hunyadi, of Hungary. See Hunedoara post here.

Dracula-son of Dracul. Attacked Turkish forces. On-again-off-again support from Hungarians, obtained throne, then killed in battle against them. Had become known as Vlad Tepes, Vlad the Impaler.

Cousin of Vlad III Dracula. King, fought Turks. Commissioned many monasteries. After a victory, shot an arrow off a hill and sited the next monastery there.