Prislop Pass, and Gateways Against Evils; For Recognition.
Gates Against Incursion, and as Memorials.
Genghis Khan 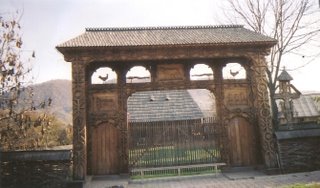 Maramures, Home Gateway, Romania
.
These are elaborate, see with recurrent twisted rope and other motifs.  The gates served notice of private property beyond, and against incursion.There are seldom high walls on the sides, however, so protection is minimal as a practical matter. here, roosters adorn the gate openings on top. See http://www.romaniatourism.com/maramures.html
.
Elaborate carved gates mark the homes, out at the street, with walkways to the compound beyond. See Maramures gates at http://www.puzzleworld.org/Maramures/budes01. The bigger the gate, the more prestige sought or claimed, as anywhere else in the world. Gated communities are an old concept.
.
II. Historical Gateways

This gateway at the Prislop Pass, see video at http://vimeo.com/49895673 is in the mountains on the way to Maramures from the Suceava area. There is no residence, no building or community nearby, and it signifies instead the farthest advance of the Mongols. In about 1242, the Mongols had reached Brasov, destroying old churches, see http://www.romaniatourism.com/brasov.html 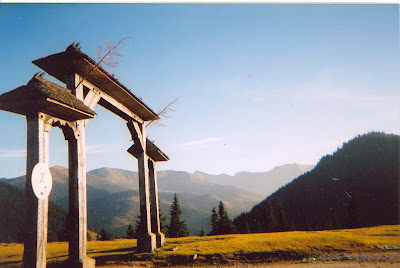 Prislop Pass, Romania, Gateway
.
What stopped the Mongols? It was not a battle.  Mongol and other horses could not manage the pristine forests.  The Mongols, a/k/a Tatars, began in about 1214, kept at it until 1717, as far as they could canter in.  See http://www.geocaching.com/geocache/GC2G74R_prislop-pass/

Reminiscence:  The film  Cold Mountain - with its vistas. No wonder. The movie was was filmed here.
Currently there is much logging in the mountains, but the logging is turning to clear-cutting.


III.  Ethnic Groups in Romania and elsewhere.  Mongols, Tatars.
.
Mongols:  Western contemporary accounts are inaccurate in many respects.  The Mongol culture was far more than our lens showing brutality.  The interesting angle is that initial brutality to subdue an area was followed often with wisdom and accommodation in the subsequent administration, adaptation, adoption of ideas, fostering arts, culture, see http://www.phocas.de/The_Mongols/the_mongols.html.  Theirs was the largest land empire in history, and remains so, see http://www.saudiaramcoworld.com/issue/200301/the.arts.of.the.mongols.htm
.
Mongols contributed to Romanian culture and the gene pool.  See http://romanianhistoryandculture.webs.com/1241mongolinvasion.htm  After the Romans and Dacians had long blended, see Romania and the Eastern Question, 1989, at  http://www.shsu.edu/~his_ncp/593Rom.html, enter the Tatars or Mongols.

What is the ethnic makeup in Romania now? Apparently, 1 in every 200 men (need to check if this in all Europe?) carry the Genghis Gene.

That is some 16 million men and who knows how many women that carry his genetic makeup, and it is unique and measurable, see Forbes Magazine on High Achieving Genes, the Khan's chromosomes, at http://www.forbes.com/fdc/welcome_mjx.shtml.
.
Genghis himself fathered so many children, as did his followers, that any gateways on the highways designed to keep him out, did not keep out the conquest by chromosome. Epicanthic folds at the inner eye? Many disappear in Caucasians by age 2 or so, I understand.  Mongol history: see http://history-world.org/mongol_empire.htm